I’ve finally made some time to work on the temperature monitor for the server room.

The Temperature Monitor currently consists of an Arduino Uno R3, Ethernet Shield and a small prototyping board.

It will currently listen to port 80 on an internal IP address. When a request comes in it will create a simple web page that shows the raw value from the sensor, degrees Kelvin, degrees Celsius and degrees Fahrenheit. In addition to the web page there is an RGB LED that reflects the current temperature. The picture below shows the simple web page and the color scale for the RGB LED. 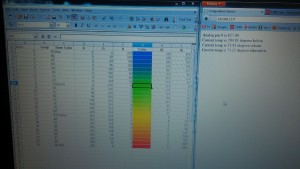 The prototype board consists of the two sections:

The RGB LED is driven by three PWM outputs from the Arduino which controls the effective voltage sent to each of the Red, Green and Blue terminals on the LED. 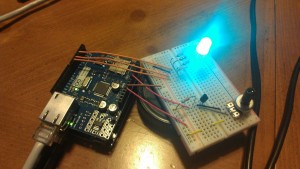 After I get the Arduino sketch cleaned up a little I’ll post the first draft of the program.

Planned improvements:
– Better looking web page. Pulled from an SD card on the Ethernet Shield. Will use character replacement to ‘inject’ the variables into the web page.